I have my Spirits WSET Diploma exam in a couple of months and so have signed myself up for a raft of Spirits tastings to help get up to speed.
First up on my list was the Bourbon evening at LAB (London Academy of Bartenders) with the London Cocktail Society on Bank Holiday Monday. London Cocktail Society is a great collection of cocktail fiends. The group is free to join and every month members are invited to exclusive tastings, cool cocktail bars or distillery visits.
The bourbon evening was hosted by Maker’s Mark brand ambassador, and Kentucky girl with an authentic Southern drawl, Jane Conner. Maker’s Mark only has one whisky in the UK market and so instead of showing a range of different whiskies we wouldn’t be able to buy, Jane took us through a maturation tasting of Maker’s Mark, comparing and contrasting White Dog, Under Mature, Fully Mature and Over Mature examples of Maker’s Mark.
First Jane set the scene with a potted history of Bourbon and Maker’s Mark.
Bourbon was first created out of luck and necessity. In order to develop Kentucky in the 1770s, the ‘Corn Patch and Cabin Rights’ law was passed, it encouraged settlers to plant a corn patch and build a cabin in order to lay claim to 400 acres of land. A pretty good deal.
Corn is a bulky produce and due to the incentives to plant corn there was plenty of excess, excess which the Scottish, Irish and German immigrants knew they could distil into whisky. Kentucky was an ideal place to produce whisky due to its plentiful supply of both corn, and water – gallons of which is used as part of the distillation process. Kentucky was blessed with an iron-free water supply that was filtered through limestone soils. Water with a high iron content would have had the unfortunate result of turning the whisky black – worth checking if you are in a hard water area or not before you try topping up your Dad’s whisky with tap water. He will notice.
The Bourbon we know today was created by a ‘little bit of smarts and a lot of luck, according to Jane. The whisky that came straight off the stills was a clear, liquid with a distinctive bite. This whisky was shipped shipped down South in barrels.
These barrels had often been used to house everything from vegetables to fish, so in order to sanitise them the insides of the barrels were burned. This charring caramelised the wood, and whisky spending six months or so on the Mississippi in these freshly charred barrels came out a darker with a smokey, caramel nose by the time it reached New Orleans.
The French settlers in New Orleans loved this dark tipple, the colour reminded them of Cognac. This whiskey came in barrels branded Bourbon County and soon the locals in New Orleans were asking for Bourbon.
Bourbon has had a chequered past but the Temperance movement dealt it a body blow when it passed prohibition in 1919; overnight 216 bourbon distillers closed down.
When Prohibition was repealed 14 years later in 1933, only 60 bourbon distillers reopened. By that time the US was awash, with Scotch, Gin and other international spirits.
Bourbon couldn’t catch up quick enough, it needed to be aged for a number of years and so literally couldn’t be created fast enough once the distilleries reopened. Many bourbons producers cut corners in order to get to market swiftly, releasing spirit too young with bags of ‘bourbon bite’, or adding iodine or wood chips to replicate the dark brown colour gained through ageing.
Distilleries closed again during World War Two and when they reopened, yet again there was not the time or money to make good bourbon. Bourbon got labelled a poor man’s whisky and the nation’s tastes had moved onto more neutral spirits like vodka and gin.
Today there are only nine distilleries left in the state of Kentucky, a product of the post-prohibition hangover.
Nowadays, Bourbon has stricter production laws than any other form of whisky to help guarantee quality and protect Bourbon’s signature full bodied spirit with lashings flavour – vanilla, coconut, toffe and spice.
1. It must be made in America
2. Must be aged for two years in new charred oak barrels – a damn expensive business each barrel costs around $130, Makers Mark use 1,000 of these barrels per week and sell them onto Scotch producers for $60 when they’re done. There are currently 6 million barrels ageing in Kentucky. 99.6% of Scotch whisky touches a bourbon barrel at some point in its life. Because of the fact Bourbon is aged in newly charred barrels, it does not age as long as some other whiskies, too much oak can be a bad thing especially with wheat-based whiskies.
3. No additions, no caramel, no colouring. Canadian whiskeys can add 9.09% other ‘imported mature liquids’ translating as wine, port, sherry, bourbon rum etc – although this is only usually done with the cheaper blends.
4. It must be distilled to no higher than 80% abv and aged at no more than 62.5% abv in new, charred oak barrels for a minimum of two years
5. It must be made of a minimum of 51% corn, with the rest being made up  of other grains. Most Bourbons have 70-80% corn. Corn is light and provides Bourbons signature soft sweetness, rye adds character, personality and bite, malted barley is argued by some to provide a biscuity sweetness although many believe it is only added to the mash bill for its enzymes. Wheat, when added, gives a gentle roundness to a bourbon and honey notes.
Bill Samuels decided to forgoe the rye and instead used wheat to make his bourbon.
With the backdrop of a struggling market for Bourbon, in 1953 Bill Samuels went against the grain, excuse the pun, and started to create Maker’s Mark a premium Bourbon. His family had previously made whisky but had sold up years ago.
Bill wanted to create a sipping bourbon of quality, he had three requirements for his liquid:
1. It should not have the ‘Bourbon Bite’, Bill wanted a smooth tipple
2. It should be full-flavoured
3. The flavour should be forward on the tongue, round and with a creamy lingering finish
In 1959, Maker’s Mark produced the first premium bottle of Bourbon. It was Bill Samuel’s wife who first hand dipped the whisky bottle in hot red wax, a practice which is still done by hand today. It didn’t really catch on straight away as the world had taken a liking to blanded, neutral spirits but once flavour made a comeback in the early 80s, Maker’s Mark was finally sold outside Kentucky for the first time and today we are enjoying it in the UK.
MAKER’S MARK MATURATION TASTING WHITE DOG
The white dog is the newly distilled spirit, so called because ‘it is white and will bite you like a dog’.
It smells of corn and freshly baked bread. On the palate it is earthy and a little chewy, almost nutty. It has got that ‘Bourbon Bite’ they talk of, but you know I actually quite like this, I was expecting it to be harsher.
UNDER-MATURE
This is the same bourbon after it has spent a year in barrel, it has got some colour and is now a medium brown hue. It smells of caramel with hints of vanilla and honey. The taste moves forward on the tongue, but is still a little harsh on the throat.
FULLY MATURE
Aged for 6 years and 3 months on average, it is richer with lots of vanilla. It smells like a Creme Brulee with cream, toffee, caramel. It is smooth and full flavoured with a round creamy flavour and long lingering finish.
OVER MATURE – 10 years old
This smells amazing, bags of caramel, wood and dried fruit. But on the palate it is not balanced, the wood has taken over and it is bitter, flat and hits the back of the throat.
Wheat doesn’t handle wood as well as rye and so a wheat whiskey will rarely be aged for as long.
Thanks for my friend and drinking buddy Ben Norum coming with me and for diving straight into a Bourbon Tasting after a week in Ibiza. Hard Core!

So I survived an earthquake in Mexico City

This year has been a weird one, full of new experiences- but one I wasn’t expecting and was thoroughly unprepared for was 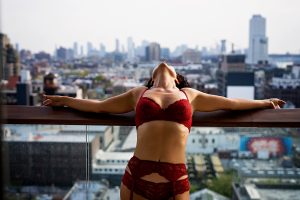 So I did an erotica shoot and why I think you should too!

So I did an erotica shoot, and why I think you should too! I’ve been umming and ahhing about whether to share 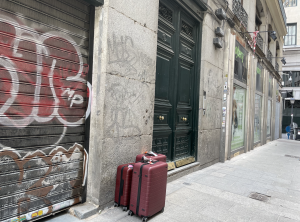 Happy to be back in Madrid, for a bit…

I arrived back in Madrid, Spain last weekend after four long months away. I’ve collected a lot of stories on my travels

I am Sarah, a curious traveller, cocktail lover, student of wine and embracer of new experiences. I split my time between Spain and the UK and wherever else in the world I need or want to be, usually with some sort of food or drink adventure in mind.

2021 © All Rights Reserved. Design by Gyroscope